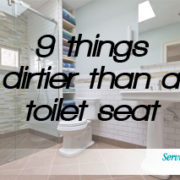 Whether you’re an alcohol gel obsessive, or swear by the five-second rule, do you really know what’s what in terms of germs?

As ever, Netmums has done the hard work for you and uncovered the nine things that are even dirtier than a toilet seat.

Don’t panic too much – immune systems were designed to deal with bugs and nasties. But still … it’s a bit of an eye-opener!

Vital life-savers they may be, but kids’ car seats are also festering with germs.

As a mum, you’ll already know how minging they can get – splattered milk and mushed-up bread sticks can give them a hurl-inducing aroma – but a British study has showed just how dirty they can get.

Researchers swabbed 20 car seats and discovered an average of 100 potentially dangerous bacteria and fungi lurking in each square centimetre.

These included E. coli and salmonella – bacteria that can lead to nasty illnesses.

By comparison, a toilet was found to contain around 50 germs in the same area, making a car seat twice as dirty!

Quick, get the vacuum cleaner out!

Sticky little fingers just LOVE to get their hands on mummy’s tablet. But beware when you swipe!

You only have to hold a tablet up to the light to see the messy smears, but one study that swabbed 30 tablets, 30 phones, and an office toilet seat, found that tablets had up to 600 units per swab of staphylococcus (a nasty little bug that causes diarrhoea) and the phones had up to 140 units.

Eek! Our tablet is getting a regular wipe-down from now on.

All kids love a roll about on the carpet, but did you know that almost 200,000 bacteria live in each square inch of carpet (that’s 700 times more than on your toilet seat).

These include the usual roll call of bacterial baddies – E. coli, staphylococcus, and salmonella.

Might be time to get the family to take their shoes off indoors to try and limit some of these bacteria!

Maybe it’s time to get your carpets cleaned? Find your local ServiceMaster Clean.

No doubt you’re a true cleaning ninja who adores nothing more than having a sparkly bathroom. Good for you.

However, tap handles are constantly in use, and can get forgotten by even the keenest cleaner.

Give them a regular, quick spritz with the antibac!

Researchers have found that our bags are three times dirtier than an office toilet seat.

Handles were found to carry the most bacteria, so it might be an idea to give them a regular wipe and clean.

US researchers studying 1,000 dishcloths and sponges in kitchens, found that a shocking 10% contained salmonella.

Each square inch of their surfaces contains about 134,630 bacteria … that’s 456 times the number on a toilet seat.

Ideally, we should be using a fresh, clean one each day.

By washing dirty knickers and pants in our washing machines, scientists estimate at least 100 million E. coli bacteria are festering in there.

Your toilet seat, on the other hand, is too dry for this to happen.

The amount of germs lurking in your washing machine may be, on average, over 1,000 times more than the average loo seat.

Not all of these will transmit to your undies, of course, but still.

Stop your washing machine becoming a germ breeding ground by washing whites separately with bleach, once a month, to kill bacteria.

We don’t have to tell you this. Just the smell of soft play tells you what you need to know!

But one US mum, Erin Carr Jordan, decided to do her own research on soft play. She enlisted the help of a microbiologist and discovered bacteria that indicated faecal contamination.

Some pathogens were even potentially deadly. Eek!

So how many times dirtier is soft play than a toilet seat?

Well, given that a study of adult gym equipment found that a treadmill contained 39 times more bacteria than a loo seat, we reckon when you add sticky-pawed toddlers into the mix, it’s probably a lot more than that!

We never enter one without our hand wash gel.

During the course of research on a TV news programme, microbiologists found some men’s facial hair contained as much bacteria as you would commonly find on a toilet seat.

Other researchers have argued this isn’t quite what it appears to be. Although beards do contain gut bacteria (also found in poo), it’s not right to assume these bacteria in beards are from poo.

For more information about cleaning services or for a carpet or sofa cleaning quote, you can contact your local ServiceMaster Clean.

Gruesome facts about your bedroom
Scroll to top